View Before & After Photos

The purpose of a breast lift or mastopexy is treat a ptotic or “droopy” breast by removing excess skin and elevating the nipple and areola. A variable amount of breast tissue can also be removed if the patient desires to be smaller following the procedure.

Who Is a Good Candidate for a Breast Lift?

Any woman whose breasts have begun to droop are potential candidates for a breast lift. The definition of being “droopy” is when a woman’s nipple and breast have descended below the level of the fold beneath the breast. Breast lift patients are often women who have experienced pregnancy and wish to undergo a mommy makeover. The procedure is also appropriate for those who have lost significant amounts of weight after bariatric surgery or with the help of a diet and exercise routine.

The Fate of the Nipple in Mastopexy 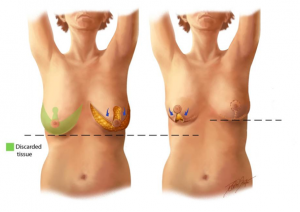 Women with ptotic or “droopy” breasts are often interested in a breast lift or mastopexy to improve their breast shape, but are reluctant to do so because they believe that the nipple and areola are completely removed and replaced as part of the procedure. Fortunately, this is seldom necessary.

As a rule, the nipple is not removed in a mastopexy. Rather than removing the nipple and reattaching it, the surgeon usually “transposes” it or slides it upward to a more youthful position. The diameter of the areola is reduced in the process. The surrounding skin is lifted and re-draped, while the nipple and areola remain attached to the underlying breast tissue.  Following nipple elevation, there is an incision around the areola that makes it look like the nipple and areola were completely removed and sutured back on. This incision is what misleads patients into believing the nipple is removed. By keeping the nipple attached to the breast in this manner, sensation to the nipple should be preserved. Conversely, if the nipple were removed and replaced, there would be a permanent loss of nipple sensation. Besides preserving sensation, the patients ability to breast feed should also be unaltered following a mastopexy. This allows future mothers to whom breast feeding is important to consider mastopexy a reasonable procedure.

There are three techniques that Dr. Pin can use to perform a breast lift procedure.

For some women, particularly those with small breasts and/or only a small amount of droop, all that may be needed is to position the nipple and areola (the area of darker skin around the nipple) higher on the breast. In this case, Dr. Pin will make an incision around the areola and nipple structure, move it to a higher point on the breast, and then suture it back into place.

This incision pattern is best for moderate amounts of sag or droop. In addition to the circular incision around the areola, Dr. Pin will make another incision from the underside of the areola down to the inframammary crease (the point where the underside of the breast meets the chest wall). Any droop will be addresses as the breast is moved into a higher position on the chest.

This incision pattern is used when there is severe droopiness, such that the areola and the nipple have fallen below the level of the inframammary crease. It adds a third incision following this crease, to create the anchor pattern.

Before and After Photos

This 48 year old mother of two was interested in improving her breast shape without an implant.

This 57 year old was 5'7", weighed 168 pounds and sought to improve the size and shape of her breasts without implants.

This 27-year-old patient was 5'10", weighed 175 pounds and wore a 36D bra. She felt her breasts were too droopy, especially since she had never been pregnant.

Before and After Photos

This is an excellent example of the appearance that can be achieved from just a breast lift procedure. In this case, it is obvious that the breasts have been lifted because the nipple and areola structures have been placed at a higher place on the chest and droopiness from the underside of the breasts has been reduced.

This case shows the results that can be achieved from combining a breast lift with a breast reduction procedure. Not only has the breast been lifted higher, but the overall volume has been reduced. However, the general breast shape remains the same.

A breast lift is done under general anesthesia, by a Board Certified Anesthesiologist, either as an inpatient or an outpatient, depending on your size and preference. The procedure takes 1-2 hours.  Since dissolvable sutures and surgical glue are used, there are no bandages or sutures to be removed and bathing is permitted the next day.  Most patients can return to the  office in 10 days and resume exercise in two weeks.

Some patients choose to combine procedures as in a Mommy Makeover, and have an abdominoplasty or liposuction at the same time.

Dr. Paul Pin understands that making the decision to undergo the breast lift procedures can be extremely difficult. Schedule your consultation at our Dallas, TX office so Dr. Pin can discuss your breast lift options with you.

Patients are frequently dissatisfied that their breasts are both too large and too droopy. The question they want to be answered is, should they have a breast reduction or a breast lift? The answer depends on many… + Read More
Blog / Breast

A breast lift procedure will lift up drooping breasts. According to the American Society of Plastic Surgeons (ASPS), the popularity of breast lift cosmetic surgical procedures has outpaced that of breast augmentation… + Read More
Blog / Breast

Any patient planning on getting a breast lift will want to know the general cost of the procedure so they can save or set aside money for treatment. Patients should plan on selecting an experienced plastic surgeon like… + Read More

.. and I appreciate the fact that even after the surgery - Dr. Pin is truly concerned about my appearance. He could have just done one or two visits and gotten the next patient in, but he has taken the time even seven months after surgery to see if I'm okay.

It was easy. One appointment answered all my questions - and set up the surgery. There was no hassle.

Everyone is so warm and friendly. Dr. Pin treats his patients with honesty and genuine concern. I actually enjoy my visits to your office.

Dr. Pin is the nicest man I have ever met. His genuine concern about his patients makes each one feel special. He treated me the same way before and after my surgery.

What I like best about this practice is the way I am treated by each person I came in contact with. Each time I have come in, I am treated like a whole person, not simply a patient.

I got the results I expected.