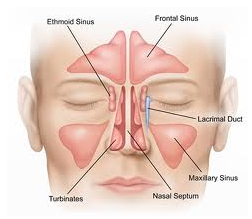 Patients seeking cosmetic improvement in their noses frequently have nasal airway obstruction. When I  see these patients, I try to make sure both issues are addressed in the best possible way.

Patients come to see me because they are dissatisfied with the appearance of their noses. While I do concentrate on their issues of concern, I also examine them carefully for the presence of airway obstruction.  Nothing can detract from a beautiful nose like a patient's inability to breathe through it. Conversely, when a patient leaves my office with a great looking nose that also works better, they are usually very satisfied.

Nasal airway obstruction is usually due to a combination of three factors: septal deviation, turbinate enlargement (known as hypertrophy,) and internal nasal valve collapse. The nasal septum is the structure that separates the two sides of the nose.  While no one's septum is perfectly straight, septal deflections can narrow the airways and markedly diminish airflow.  Though this problem is easy to diagnose, it can be difficult to treat.  The standard way to treat septal deviation is to simply  remove the segment that is obstructive.  The problem arises when the obstructing segment is supporting the nose.  It this situation, the obstructing piece needs to be modified or reshaped while retaining its strength.  In this case, it may be necessary to use cartilage grafting to add support.  Grafting refers to the process of taking cartilage from a portion of the septum where it is not needed and moving it to a weak spot that needs to be reinforced. Since grafts can twist or displace, grafting  increases the complexity of the rhinoplasty.

Turbinates are long finger-like projections on the lateral aspect of the nasal airway that help regulate, humidify and filter air as it passes through the nose.  When enlarged, which is commonly due to allergies, turbinates can reduce airflow.  If necessary, as part of a rhinoplasty, the turbinates can be reduced to restore airflow.  It is vital that not too much turbinate be removed or their essential functions will be lost.

Internal nasal valve collapse is a fancy explanation for  why strips of tape across the top of one's nose help breathing.  Normally, a strip of cartilage in the middle third of the nose helps hold the airway open on inspiration.  When weakened, the airway can collapse.  This condition can be readily treated during rhinoplasty by placing a small "spreader" grafts along the septum to prevent the collapse.

I personally believe plastic surgery is the specialty best suited for treating cosmetic nasal deformities.  However, I do have to admit, Otolaryngologists or ENT doctors are generally more skilled in treating airway obstruction.  For instance,  unlike most  plastic surgeons, ENT doctors can endoscopically reduce turbinates, which relieves the obstruction but preserves the function of the turbinate. An additional advantage of the endoscopic treatment is that it lessens the risk of post-operative bleeding following turbinate reduction, which can be significant enough to necessitate a return to the operating room.  For these reasons, I like to refer prospective rhinoplasty patients with airway obstruction due to turbinate enlargement  to an ENT doctor.  If they feel they can help the patient, then we will jointly operate on the patient during the same anesthetic.  The ENT will usually go first and once they are satisfied with their treatment, I proceed with cosmetically improving the patient's nose.  The patients treated in this way have the highest probability of an attractive nose they can actually breathe through.

Myths and Misconceptions About Breast…

Why Should I Get a Tummy Tuck: Five Key…

Should I Sleep Wearing a Bra If I Have…